Déjà vu, synchronicity, or coincidence? I’m not sure what word would best describe this situation. All I can tell you is that I did not plan nor did I realize that my next recipe was going to be another Harira soup.

This version doesn’t have lamb meat, but it does come from The Scent of Orange Blossoms which is a traditional cookbook of Jewish-Moroccan recipes. So, we can gather that this version is more traditional than Isa’s.

The authors of this cookbook say that this dish “typifies the cross-cultural exchanges between Morocco’s Arab and Jewish communities.”

Both cultures have a tradition where they break each day’s fast with this soup. Muslims in the month of Ramadan and Jews at the end of Yom Kippur.

The lesson I get from this is that food is the answer for peace! I declare open borders for food!

Getting back to tradition. Isa, in the last entry seemed surprised one would use angel hair pasta in this soup, but the two ladies who wrote this cookbook mention that angel hair is one of many variations. Should I let Isa know?

You can also use leavened bread as well as various types of grains.

The first step is to heat the oil in a large pot over medium-high heat. By the way, when in doubt, use medium heat. Moderation is a friend of the doubtful.

Add the onions to the pot and stir in a moderate intervals of time for 4 to 5 minutes. Then add the celery, lentils, and 6 1/2 cups of stock. Cover your pot and bring this to the max boil, aka rolling boil. Cook this under the max boil for 10-15 minutes and then decrease to moderate medium.

While this is happening, you can prepare your tomatoes via the scoring method. Scoring involves marking your tomatoes with the x of death on the stem and then boiling in max heat boil for 30 seconds. Drain and cool the tomatoes after that and by then you can skin them alive and chop them to bits. 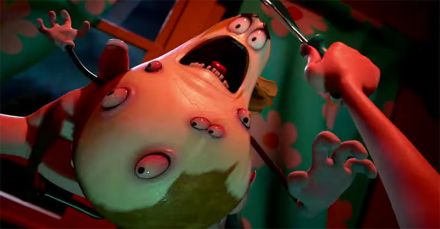 When you have brutally murdered and dismembered your tomatoes, you will add them into a blender with 1/2 cup of stock, cilantro, parsley, turmeric, and ginger. Your goal is to have a fairly smooth consistency. When you’ve reached that goal, add it to your pot along with rice and garbanzo beans. Cook this for 30-35 minutes and season with salt and pepper.

5 minutes before your soup is ready, bring it to a simmer. While it is simmering, in a bowl, mix flour with the remaining stock to create a paste. Add this to the soup and stir until it thickens.

You are now ready to serve your soup with a fresh slice of lemon!

I liked this version of Harira better than Isa’s. It wasn’t as hearty, but I preferred that. The lemon slices are a nice touch that I enjoyed as well. It gave the soup a refreshing citrus taste that wasn’t present in Isa’s version.

I can see why both are popular to end a fasting period too. They are hearty, comforting, and relatively healthy at the same time. 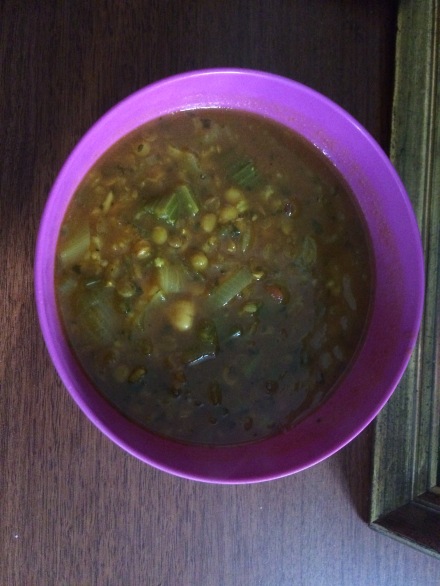 Here is another hearty vegan soup from Isa Does it!

I was starting to worry about Isa. Her cookbook started out strong in my favorable opinion, but I’ve been a little disappointed with the last few recipes.

This soup brings my favors back on track!

I call it a soup, but it’s almost hearty enough to be classified as a stew. Isa even claimed to have an “existential crisis” in trying to figure out how to label it.

This is also not a traditional recipe for harira, but her variation of it. Traditional harira is made with lamb meat and rice instead of pasta. If you are a vegan or are wanting to cut down on meat consumption, this is an excellent alternative.

The first step is to pre-heat a large soup pot over medium-high heat for the oil. When oil is hot, add onion with a bit of salt. Cook this until the onions are translucent then add the garlic, ginger, and red pepper flakes. Saute this for about a minute.

The next step is to deglaze the pot with some broth. This is a fancy way of saying, pour some liquid in there to scoop up any crap that might be sticking on the bottom of your pan. I don’t know why they have to call it deglazing though. This is cooking, not pottery making.

When you’ve rid yourself of your pot clingers, you will add the eggplant, lentils, paprika, cinnamon, one teaspoon of salt, the saffron, and 4 cups of broth. The saffron is only for the privileged, spoiled elite. I didn’t make the cut. This is an ingredient for the Ivy League not the Big Ten.

If you’re observant, you might notice we only put in half of our vegetable broth. This is due to speeding up boiling time for the lentils and eggplant. Don’t fret! We will add the remaining broth later!

Cover the pot and allow it to rise to a boil. Once boiling, lower the heat a hair, so that’s it still boiling, but not erupting like a volcano. Leave the lid ajar as well. Do this for about 20 minutes.

Deglaze without adding in liquid once in awhile as well.

When the 20 minutes are up, add the tomatoes, chickpeas, mint, cilantro, and about 2 cups worth of broth or as much as it would take to ensure a soup consistency. Bring this to a boil and then add the pasta. Stir and cook until the pasta thins and softens. Then add the remaining broth and serve with your extra garnish!

The best part about this soup is the pasta. Isa and I agree about this issue, so I feel like most people will too. The other star of the harira show is the garbanzo beans. The eggplant is a close third. My eggplant turned out a little mushier than I would have liked, but overall this was a nice, hearty stew. I recommend consuming it on a harsh, cold winter night. If you are from California that translate to a rainy night or anything below 60 degrees. 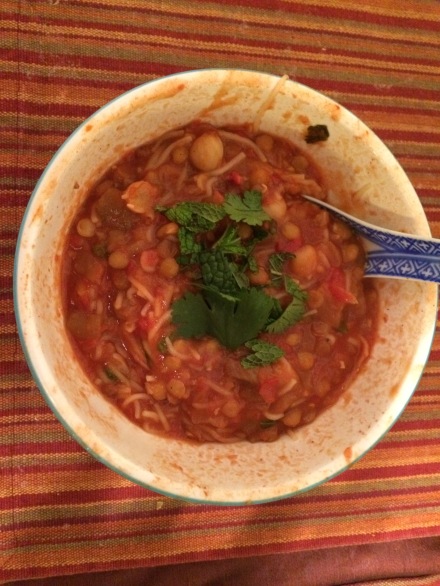 Thank you. I call that poem, Nixon’s Cooking Blog.

On a more serious tone, I do not consider myself a baker. My experience in baking cookies is almost nil. In other words, these are the second cookies I’ve ever made that didn’t come from a Pillsbury tube.

I get nervous when I have to bake, but these cookies from Taste of Home Cooking for Two were not difficult at all to make and I think even Nixon would get great results if he had ever tried making them.

The first step is to mix the shortening with the sugar. If you didn’t know, I didn’t anyway, shortening is basically butter. You can also use margarine. Whatever you use, make sure it’s been melted. When this process is finished, you add the egg and vanilla.

In a separate bowl, combine the oats, flour, baking soda, and salt until evenly mixed. Then slowly add this mixture to the butter, vanilla, and egg one. The walnuts will be the final touch to this mixture.

Once everything has been added, grease a cookie pan and spoon in the mixture, leaving 3 inches in between. It is recommended that each spooned in mixture be circular, but feel free to experiment. I wasn’t feeling creative, so I stuck with circles.

Whatever shape you choose, bake those shapes at 350 degrees for 9 to 11 minutes. Once those minutes are up, allow them to cool for about two minutes and then you can turn into the cookie monster and dream about the moon being a cookie so you could eat it. 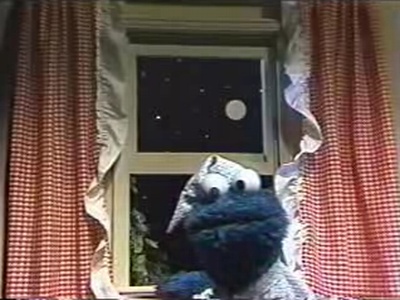 I brought these cookies to one of my temp offices and everyone seemed to be surprised by how good they were. Like me, they weren’t big fans of regular oatmeal cookies and were pleasantly surprised by this version.

I would make this again and I would add chocolate chips, mostly to please the cookie monster. 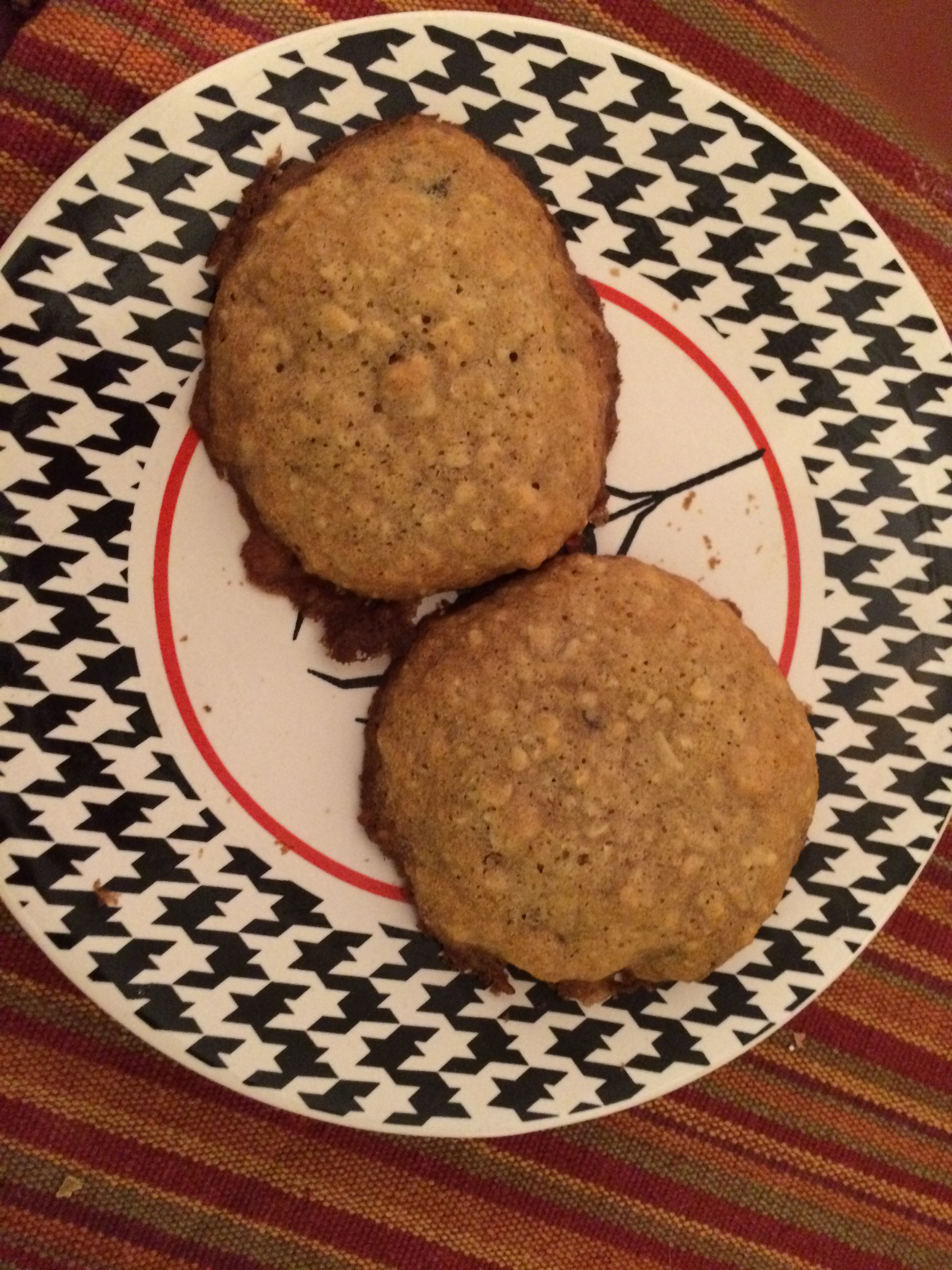