My next recipe comes from Light and Healthy and is a continuation on the crostini recipe I wrote about months ago.

This recipe challenges you to not be a basic with your tiny garlic bread and instead asks you to be extra vanilla with white beans and arugula.

I’m not so sure that joke worked. Maybe I need to get my money back from that comedy class I took.

The first step is to mix the beans, oil, lemon juice, and 2 garlic cloves in a food processor until the mixture is smooth. It’ll look a lot like hummus by the time you’re through.

Next, combine this mixture in a bowl along with the cayenne and shallot. Feel free to also season with salt and pepper as well.

Once this is combined, cover the bowl and allow it to rest under room temperature for about an hour.

When you’ve got 10-15 minutes left waiting for that mixture to settle go ahead and prepare your crostini by following the crostini recipe I mentioned earlier.

When that basic recipe is complete, your bean mixture should be well settled. Take a tablespoon of the bean mixture and spread it on each slice. Then sprinkle arugula on top and you are finito! 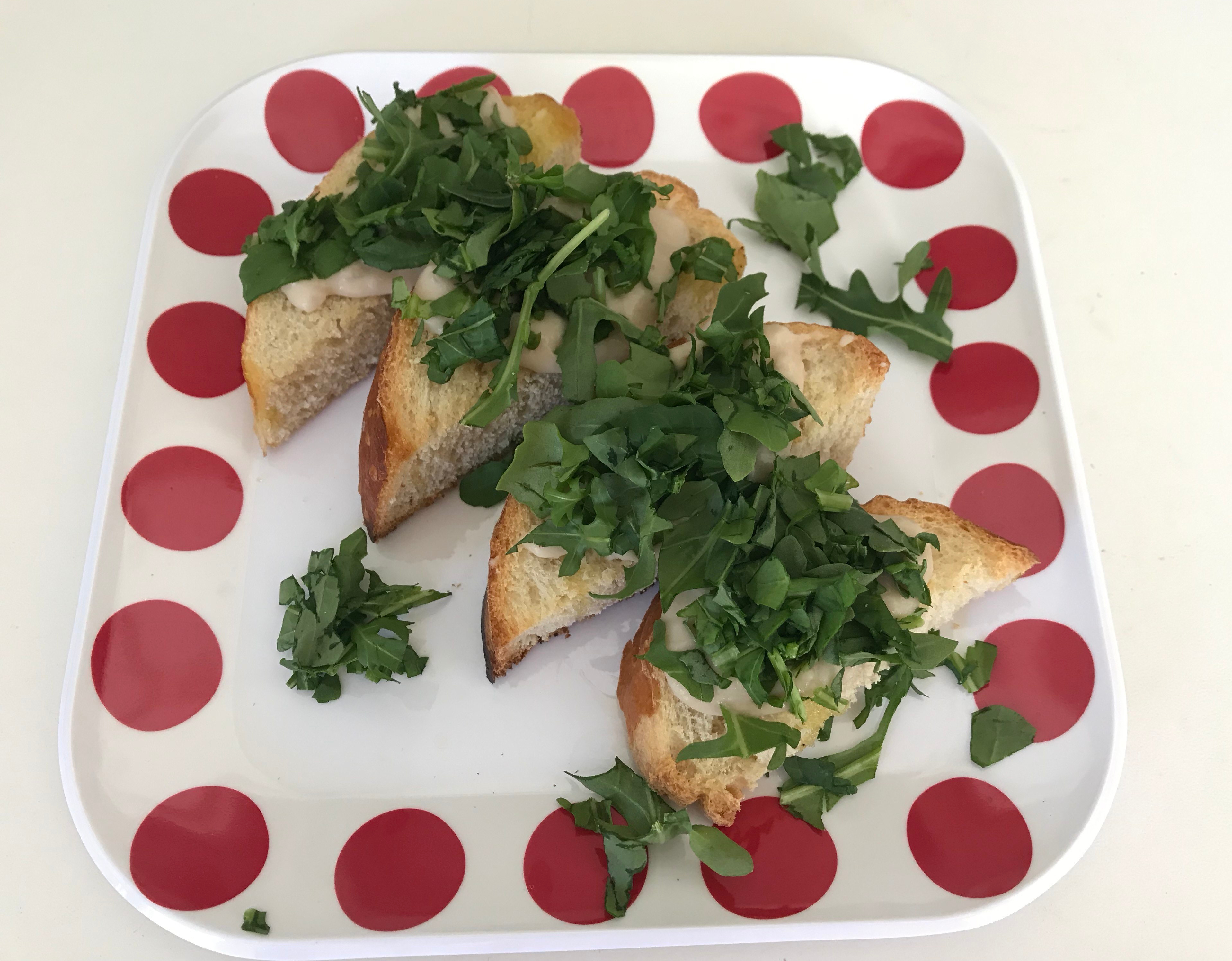 This is a little larger than crostini, but the taste will be the same

As you can see in the photo, I purchased bread that was little bigger than what is called for. You’ll actually want to select a baguette that’s about half the width of what I ended up with.

If you want to be a goody two shoes and follow the rules that is. Otherwise, it doesn’t really matter. I can assure you it’ll still taste great.

So how is the taste?

Pretty damn good. As I mentioned earlier, the bean spread reminded me of hummus and that follows through in regards to taste as well, but my favorite part of this recipe is the arugula.

I love arugula. It’s springy and tastes so fresh and green with it’s slightly nutty flavors. Combine that with a bean spread and you just feel…I don’t know…one with nature I guess.

Like you’re just meeting mother nature and your nonna for a light picnic. That’s the best way I can describe it.

So go ahead, plan your fantasy picnic and be one with the universe.

Dearest readers, how have I missed thee.

Apologies for the hiatus. I was too busy to cook the last few weeks, which meant I couldn’t write about cooking.

Our time apart has been well spent, though I did miss all of you. In case you’re curious what kept me, well I was performing in a little play called Othello and I’ve been taking a stand-up comedy class so expect classier jokes in the near future.

My pesky day job is also a thing that keeps me away, but that’s not fun to talk about so I’d rather move on to my next recipe which is chorizo and mushroom kebabs from I Love Spice.

Kebabs are the best aren’t they? They don’t require a lot of skill. You just grill some stuff and then stab it with a stake.

I dare say this had to be Vlad the Impaler’s favorite meal to cook.

I must caution you readers, however, that when it comes to chorizo we can’t be all Vlad the Impaler about it. We have to choose wisely and pick the right chorizo. Not every chorizo can be impaled. Mexican chorizo, for example is usually grounded and crumbly which means it is unable to be staked.

What we want to buy is Spanish chorizo which usually comes cured and dried aka a solid form of sausage.

My neighborhood Vons did not have Spanish chorizo, but they did have longaniza which google has told me is similar to chorizo and even better is in a solid shape that one can hopefully impale.

Now that we got that important info out of the way, the only step that I need to advise you on is roasting your pepper.

I recommend roasting it in an oven with a pan coated in olive oil under 400 for 20 minutes. When the 20 minutes are up, turn the pepper so it can have an even tan and roast for another 20 minutes.

Once this step is over, remove the pepper from the oven and allow it to cool so you can remove the skin and cut it into 24 squares.

While the peppers are cooling you might as well get started on cooking your chorizo. To do so, get a skillet and coat that in olive oil. Heat the skillet under medium heat and then add the chorizo.

Now if you got dried and cured chorizo, you should only need to cook this for 20 seconds, but if you had to substitute like me, you’ll need to cook for a longer amount of time, because 20 seconds is going to give you a health code violation for sure.

Once your meat is cooked throughly, we can add the mushrooms into the skillet. Cook this for 1-2 minutes. You’ll know the mushrooms are ready when they look slightly brown and are glossy just like Vlad after a hard day of impaling people.

Speaking of Vlad, we are now ready for his favorite part! Making the actual kebab!

All you have to do is impale a bell pepper, followed by a mushroom, and then a kebab.

You can use a toothpick to make this more of an appetizer or get your large stake and make it a meal.

The choice is up to you for your enjoyment. 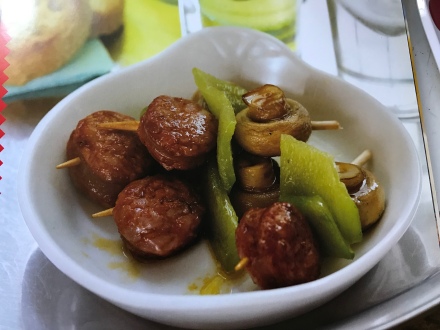 So as you may have guessed from the professional photo above, I failed. Turns out that longaniza is not easily impaled. It is more solid than Mexican chorizo, but it fell apart when I tried to stab it.

I will say that this combo is tasty one, so if you find the right chorizo do give it a try. Otherwise I recommend making yourself some chorizo and eggs instead of a kebab.