I enjoy Isa from Isa Does It. She throws in little slices of humor and tips for lazy cooks. Plus, she has a deep connection with her heritage, which I appreciate and relate to.

This particular recipe is a vegan alternative to borscht and I’m guessing it comes from her grandmother since babushka means grandmother or elderly woman in Russian. I do know at the very least that her ancestors are Russian and that she loves imagining them eating and preparing this dish. As I like to do with my own ancestors whenever I make pasta.

Before I lay down the cooking steps, let me side track into how to make the cashew cream.

It’s simple, but it takes some planning ahead. All you do is take one cup of cashews and soak them in water for two hours. Drain the water and place the nuts in a blender with 1 1/2 cups of water. Blend until it’s smooth and creamy. Isa also notes you can spice it up with salt and lemon juice if you desire.

If you are not vegan, however, a friend of mine who spent some time in Russia likes to make his borscht with sour cream. I have yet to try his borscht recipe, but I have to admit that I wasn’t feeling the cashew cream. If you are a corrupted animal product dairy lover like myself, you also might find it preferable.

The first step, beyond the cream, is to pre-heat the oil in your largest soup pot. Saute the onion with some salt for about 5-7 minutes. The onions should be slightly soft and translucent in color. Add the garlic next, and cook for only 30 seconds.

Now we will add just about all the remaining ingredients. The lemon juice, dill, and cream are the only ingredients left out at this time.

Cover the pot and allow it to boil. Once it’s boiling, lower the heat, leave the lid slightly ajar, and simmer for about 35 minutes or until the beets are tender.

Once the beets have been tendered, add the lemon juice and then serve individually with garnished cream and dill.

My final results turned out ok. Like I said earlier, I wasn’t too happy with the cashew cream. I think I would have preferred a dairy product of some sort. I made her cashew cream for another recipe, however, and thought it was delicious. It’s possible I didn’t blend well enough this time or maybe the cashews were fresher the first time I made it.

Other than that, I found this soup to not only be healthy, but full-filling. Beets aren’t magical fruits, but they are magical vegetables with numerous health benefits.

Which is probably why I want to corrupt this soup with sour cream. Without sour cream, it’s just too good for me and I don’t deserve it unless I knock it down a peg. 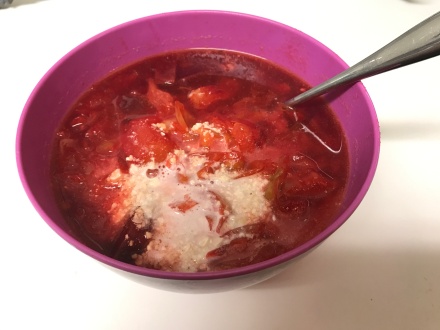