Did my absence make your heart grow fonder?

I’m not certain I was missed, but I am certain you’ll enjoy this quiche recipe from Cook This Not That.

The first step is to pre-heat your oven to 375.

By the way, I opted for making my own pie shell. I googled quiche crust and just went with that. It wasn’t too difficult to make.

The beauty of quiche crusts is that they are supposed to be thin and if you screw up and make it too thin, the egg in the quiche will do some nice chalking for you.

No shame in getting a pie shell from the store though. I’d just check out those package instructions to make sure you bake accurately.

Whichever shell path you take, the goal is to just toast it. In other words, we don’t want it brown just yet. The cookbook said that would be about 8  minutes, but again I’d alter that depending.

While you’re waiting for the magic hour of baking, go ahead and heat the oil in a skillet over medium heat. Then add the garlic and cook for only 30 seconds. Once that countdown is up, go ahead and add the spinach. Cook this for about five minutes or until the spinach has wilted.

Once the spinach has cooked, remove it from the pan and shake out as much excess water as possible. Then mix it in a bowl along with the ham, cheese, eggs, milk, and half-and-half.

Top this off with salt and the nutmeg once you feel everything is nicely mixed.

Hopefully by now the shell crust has toasted properly. If it is, then add the egg mixture in  and bake for about 12 minutes. 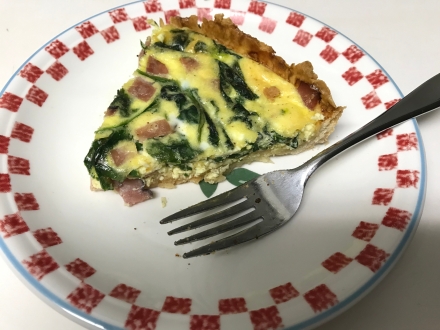 I’m going to be honest. I’m having writer’s block about how to describe my enjoyment of this recipe.

It’s the same critique my friends. If you’ve been a dedicated reader you already know I love egg dishes. So honestly, it’s almost impossible to disappoint me with quiche. Especially when ham and cheese is involved.

Why is Gruyère so good too? It’s a slightly bitter, cheesy butter when melted. It pairs so well with eggs and ham.

So yeah, that’s all I have to say and that it’s nice to be back. I’ll try to not let so much time pass from now on.