My next dish comes from a book called I Love Spice. I know I’ve been talking a lot about cheese lately, but my one true soulmate and love is spicy food. My mother knew this, so when she saw this book she had to get it for me.

For a book about loving spice, it’s not been all that hot for me though. Then again, I’m also still in the appetizer section. I’m hoping that like most things that get real hot, the beginning is just a tease act.

Samosas, if you don’t know, are an Indian appetizer. Despite the similarities in namesake, they are not a refreshing cocktail like a mimosa by any means. For a long time I kept thinking I was getting the name mixed up because of this. There is an Indian fruit smoothie drink called a lassi, but it is nonalcoholic and nowhere near to being like a mimosa. I have often wondered what a lassi would be like with alcohol though. These are my best guesses as to why I kept thinking samosas weren’t what they are. What they are, in the best way I can describe is India’s version of an eggroll in a triangle shape.

The filling for this samosa is diced sweet potatoes, onions, peas, and spinach. The recipe called for filo dough and I went to an Indian market to find some, but the clerk told me to just use spring roll wraps. He said it was very similar and that one of his customers makes samosas with them all the time. I still am not sure what a filo dough wrap would be like or what the difference is. So the spring roll wrap worked for me.

The first thing you do to make them is to saute the onions and the sweet potatoes. The sweet potatoes need time to soften so it’s best to cook them first. Then you add the peas, spinach, and some Indian spices. The main spice is gram masala followed by some cayenne pepper.

Once the filling is cooked you fold the spring roll wrap once in a triangle of course and then add two scoops of filling. After that you just keep folding until it’s covered. Once everything is folded up, you throw it into a frying pan and let it sizzle for a couple of minutes on each side.

The folding of the filling is the most labor intensive part of this recipe. Everything else is real easy. I recommended having a friend help you out, because after awhile all the folding gets old for one person. An assembly line process for the folding and frying would make things a lot faster and easier. I kept wishing I had one when I made these.

Despite that, they turned out really well and I ended up taking them to a party where everyone seemed to enjoy them. My good friend even asked if she could take some home with her. Being a novice cook, that pleased me very much. 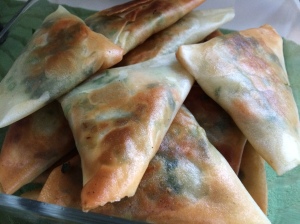 The sautéed filling and the final product!